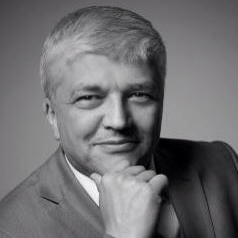 Born on April 9, 1958 in Sofia, Bulgaria. In 1973-1977 – attended ‘Electronics’ Technical College majoring in Industrial Electronics. In 1983 - graduated from the Sofia University of National and International Economy as Financial Reporting Economist. In 1991 - took a course of studies at the University of Colorado with a concentration in Strategic Planning and Management of Telecommunications Facilities (Denver, Co.). In 1993 - completed the Eurocommission’s course in “Financial Management of Telecommunications Facilities” (Sofia, Bulgaria, and the Hague, Holland)). In 2003 - earned a Ph.D. from the Moscow Technological University of Telecommunications and Information Technology. In 1977-1979 - served as a radio operator in the Armed Forced of the Republic of Bulgaria. In 1983-1985 - finance director of a production division of Higher Technological University in Sofia, Bulgaria.