Participants of the jubilee online conference acknowledged the remarkable contribution made by Intersputnik to the elaboration and implementation of pioneering satellite technologies, as well as the prominent role that the Organization plays in upholding public interests and assisting in economic, social and humanitarian projects worldwide.

November 15, 2021, witnessed a triumphant online conference held on the occasion of the Intersputnik’s 50th anniversary. Intersputnik was represented by: Andrey Zhivov, Chairman of the Board, Deputy Director, Department of the Development of Mass Media and International Cooperation, Russian Ministry of Digital Development, Communications and Mass Media; Evgeny Buydinov, Chairman of the Operations Committee, Deputy Director General for Сommunications Systems Development and Operation, RSCC; Ksenia Drozdova, Director General; other members of the Directorate. Delegates from member countries and partner agencies, including top officials of international industry organizations and business counterparts, joined us in celebrating this landmark moment.

The participants were unanimous in recognizing the importance of Intersputnik’s being involved in the promotion of international cooperation thus contributing to the advancement of satellite communication systems, which is today in great demand and relevant like never before, to accomplish the Sustainable Development Goals as defined by the UN, and, ultimately, to improve the quality of life for people across the continents.

In his address, Houlin Zhao, Secretary General of the International Telecommunication Union (ITU), noted that both ITU and Intersputnik had been committed to promoting space communications, including satellite communications to propel global digital transformation. He also accentuated the significance of satellite communications for achieving the UN’s Sustainable Development Goals and resolving the burning global issues, from the climate change to the digital divide.

On a final note, Mr. Zhao congratulated the Members, Signatories, and Directorate of Intersputnik on the jubilee, and voiced confidence that its Director General Ksenia Drozdova would keep steering the Organization towards accomplishing its paramount mission of encouraging the international cooperation in the domain of satellite communications.

Mario Maniewicz, Director of the ITU Radiocommunication Bureau, highlighted the activities of Intersputnik within the ITU-R framework aimed at augmenting satellite systems. He also stressed that the ITU-R consistently supported the constructive initiatives of Intersputnik.

Simonetta Di Pippo, Director of the United Nations Office for Outer Space Affairs, pointed out that Intersputnik was one of the oldest intergovernmental organizations engaged in the space sector, which is yet another reason why its work is highly appreciated.

Ms. Di Pippo also cited Intersputnik as a permanent observer with the UN Committee on the Peaceful Uses of Outer Space (COPUOS) since 1985 and a keen participant in its discussions aimed at keeping the consistently predictable, inclusive and flexible international legal regime of outer space. Furthermore, in 2018 Intersputnik signed a declaration on the acceptance of the rights and obligations under the UN treaties on outer space, which is a compelling evidence of the organization’s commitment to the responsible use of outer space.

The Director of the United Nations Office for Outer Space Affairs ended her address by congratulating Intersputnik on its 50th anniversary and thanked the Organization for its contribution to the international cooperation and the development of a multilateral space ecosystem over as long as half a century.

Piotr Dmochowski-Lipski, Executive Secretary of the European Telecommunications Satellite Organization (EUTELSAT IGO) emphasized the unprecedented involvement of intergovernmental organizations in the ever-changing and fast-paced space environment. It is them who understand how important it is for the satellite industry to ensure public processes and fulfill public interest obligations. Intergovernmental organizations perform a vital role of a public watchdog of protector of common heritage and broker of interests of many stakeholders.

The head of EUTELSAT IGO reminded that the implementation of the Preamble and 21 Principles of Long-Term Sustainability of Outer Space Activities, defined by the COPUOS, is the prerequisite for preserving the Earth and space for future generations.

He also emphasized that Intersputnik’s membership in international alliances facilitated joint efforts put into overcoming global problems facing satellite communications. “As a member of the ITU Radiocommunications Sector, due to its cooperation with the many private satellite operators, Intersputnik is able to effect real change in the satellite industry, which is now increasingly recognized as a central pillar in the challenge to achieve the UN Sustainable Development Goals,” he said in his congratulations.

In 2021, Intersputnik and the entire satellite communications industry have been facing serious challenges, which are highly likely to continue in the future. They include, for instance, a tougher competition in terms of orbit and frequency resource, the breakthrough in broadband Internet access, the inflow of newly-connected users and service subscribers, and capacity enhancements all over the planet. Universal progress in the satellite industry is unimaginable without sorting out these issues. The head of IMSO believes that it is the partnership with such organizations as Intersputnik that underlies successful cooperation with a view to rising to challenges.

Intersputnik attaches great importance to its participation in the Regional Commonwealth in the field of Communications. Nurudin Mukhitdinov, Director General of the RCC Executive Committee, has pointed out that as a universal provider of satellite capacity and technical solutions, Intersputnik enables the RCC member countries to build up their communication networks, which encourages the economic growth, advances the scientific and technological progress, and improves the quality of life.

Representatives of the Department of Telecommunications of the Government of India cited Intersputnik as a technological trendsetter for introducing innovations in the satellite communications industry.

The online conference was held in an amicable and life-affirming ambiance, following the principles laid down half a century ago when Intersputnik was established, and which we still pursue in our work. All participants paid tribute to the tremendous work that the Organization had been doing to deploy a global information and communication ecosystem operating in common interests.

The crowning glory of the event was the commemorative cancellation of the postage stamp dedicated to the 50th anniversary of the Intersputnik. The ceremony was attended by the Intersputnik’s chief executives: Andrey Zhivov, Chairman of the Board; Evgeny Buydinov, Chairman of the Operations Committee; Ksenia Drozdova, Director General. The postage stamp features the golden jubilee logo of Intersputnik. The item was printed in 120 thousand copies. 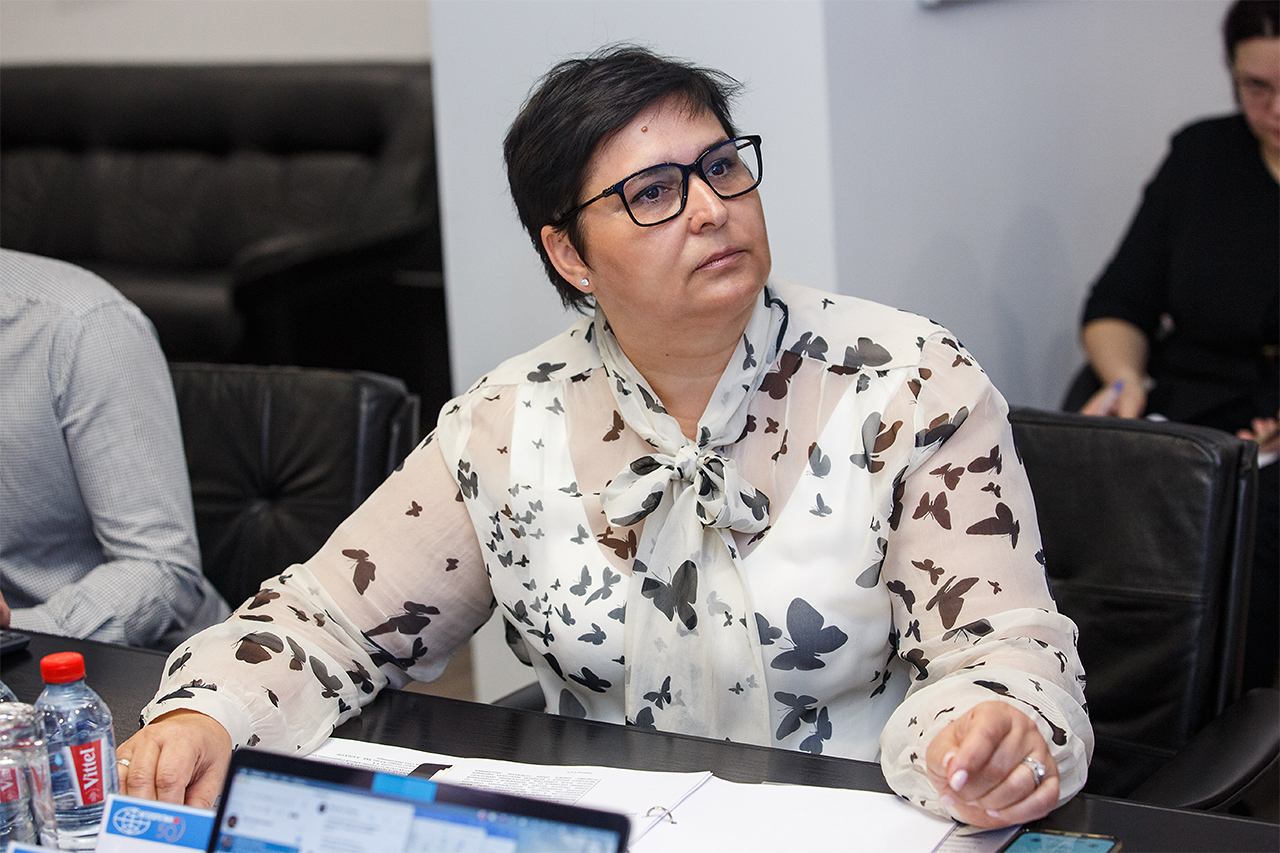 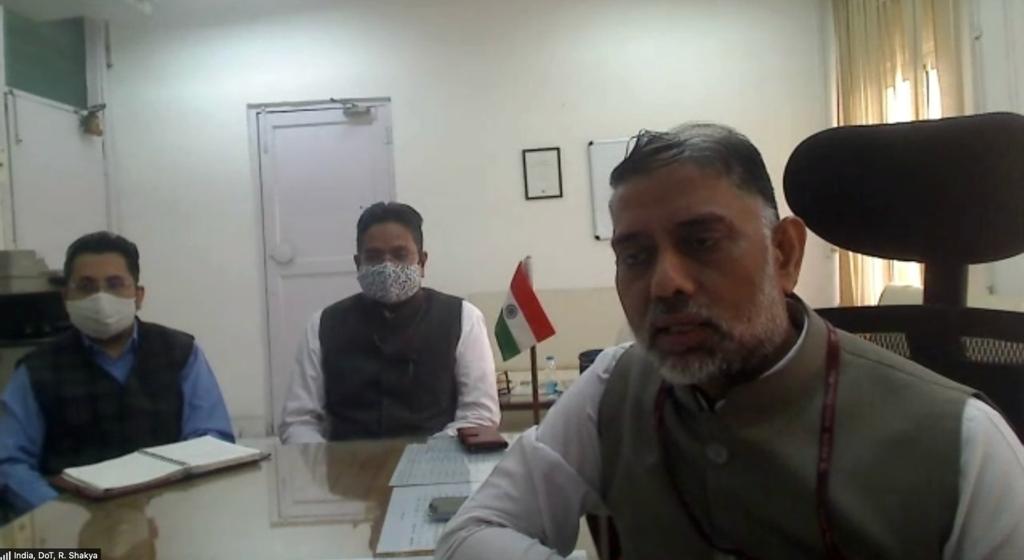