Execution of Agreement of cooperation between IMSO and INTERSPUTNIK

The IMSO Director General Captain Esteban Pacha-Vicente today announced that an Agreement on Cooperation between IMSO and the Intersputnik International Organization of Space Communications was signed in London on 25 January 2013 by the respective Directors General during a visit to IMSO by the Intersputnik Director General Mr Vadim Belov and Executive Director Mr Victor Veshchunov.

His Excellency Mr Alexander Yakovenko, Ambassador of the Russian Federation to the UK, was also present at the signing ceremony of the Agreement.

The execution of the Agreement follows negotiations to expand bilateral cooperation and to further consolidate their friendly relations, including observer status at the respective meetings of two organizations, as appropriate. The Agreement replaces an earlier Agreement between Inmarsat and Intersputnik which the IMSO Assembly had requested the Director General to negotiate. Similar Agreements and/or reciprocal observer status have been agreed by IMSO with other intergovernmental organizations.

The entry into force of the Agreement is subject to approval by the IMSO Assembly and the Board of Intersputnik.

Captain Pacha-Vicente said «I am confident that the IMSO Assembly of Parties, which is due to meet in the last quarter of 2014, will unanimously approve this Agreement. This is a culmination of continuing cooperation between the two organizations, and will enable Intersputnik to participate as an observer at meetings of the IMSO Assembly of Parties and Advisory Committee, and contribute with its experience in the field of space communications in general and mobile satellite communications in particular».

In his turn Mr Belov said: «Signing of the Agreement is an important milestone in the international activity of Intersputnik. Our Organization pursues the consistent line aimed at expanding mutually beneficial cooperation with other international organizations and first of all with those engaged in the satellite communications area. The Agreement with IMSO will be submitted for approval by the Intersputnik Board at its next session to be held in June 2013 in the Kyrgyz Republic we are hopeful that the IMSO Director General will take part in this session as an observer.» 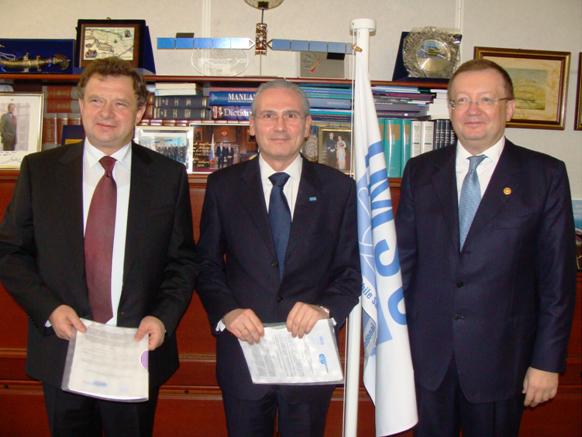 Ambassador of the Russian Federation to London